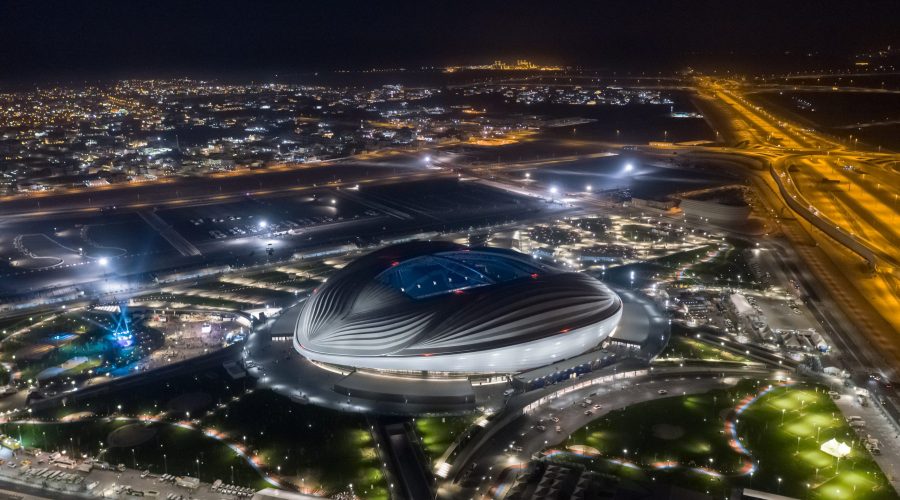 Qatar was chosen to host the 2022 FIFA World Cup in 2010. It would become the first Muslim-majority country and the first country in the Middle East to host the World Cup. Qatar previously did not have the sporting capability for the Cup, and as such 8 new stadiums are expected to be built to prepare for the Cup.

The stadium was inaugurated on 16 May 2019, during the Amir Cup final between Al Sadd SC and Al-Duhail SC played in front of an audience of 38,678 people. This match was attended by the Emir (head of state) of Qatar, Sheikh Tamim bin Hamad Al Thani.

According to the designers, it was inspired by the sails of traditional Dhow boats, used by pearl divers from the region, weaving through currents of the Persian Gulf. The curvilinear roof and exterior references Al Wakrah’s history of seafaring, additionally giving spectators the feeling of being on a ship. Bowed beams hold up the roof, resembling a ship’s hull. The building is meant to resemble upturned dhow hulls arranged in a huddle to provide shade and shelter. The roof of the stadium is retractable and is made from pleated PTFE fabric and cables, with the roof arches being 230 meters long.

The cooling system prevents the stadium’s users from overheating, due to Qatar’s hot and arid climate. It is capable of cooling the spectator areas to 18°C and the field of play to 20°C. According to Qatar’s Supreme Committee for Delivery & Legacy (SC), “detailed micro-climate analysis informed the arena’s shape, with aerodynamics and optimal shading from the roof, which incorporates a minimal amount of glass, making a significant contribution to temperature control.”

The sports complex includes a multipurpose room, with swimming pools and spas and a shopping center with green roofs. The entrance to the stadium will be on a wooded square.

A school, wedding hall, cycling, horse riding and running tracks, restaurants, marketplaces, and gyms within the vicinity are planned to be built to accompany Al Janoub Stadium.